Marina became involved in dog shows back in the late 1980’s which she attended with her mother who was breeding and showing Beagles under the Belsmard affix. Her mother had competed in obedience, working trials and also breed showing, so was the ideal person to encourage her. 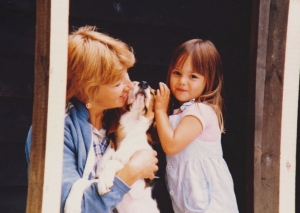 Marina got involved in dog showing as a girl thanks to her mum, Maggie.

Marina winning the Pedigree Chum UK Junior Handler of the Year title 1998 with her Beagle, Kissy.

As a result of her wins in junior handling, Marina wrote the book, Junior Handling The White Way. The book was published in the autumn of 2001 and has sold thousands of copies in the UK and around the world.

Marina became involved in breeding Beagles and subsequently bred a bitch (Belsmard Tender Kiss) who gained her JW, a RCC and who went onto become the first Beagle to win Best In Show at a National show in Spain. Two further Beagles owned by Marina won their stud book numbers, one via a JW (Belsmard Double Kiss). 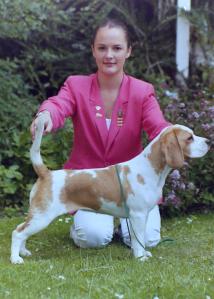 After completing a degree in Multi-media Journalism, Marina returned to the rings, this time exhibiting and owning three Border Collies. They have all gained their stud book numbers – Shadow became a Champion, Simba and Miya also have their ShCM and one of these also gained his JW. 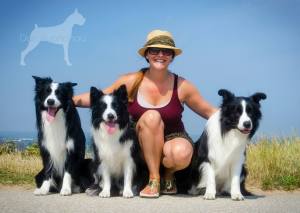 Marina enjoys handling other people’s dogs and has won Challenge Certificate’s in Beagles, Border Collies, Basset Fauve de Bretagne, Dalmatians and Nova Scotia Duck Tolling Retrievers and has made up threechampions for other owners. She’s also appeared in all breed Championship groups with a group 3 placing at Border Union with the Border Collie (Faith) seen below and she’s also won BOB (no CCs) with an Afghan Hound, Finnish Lapphund and Nova Scotia Duck Tolling Retriever at general ch shows. In 2014 at Boston Championship Show she handled a Beagle to win BPIS. 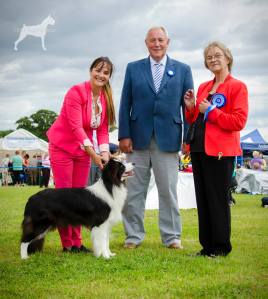 Marina has also experienced dog showing around the world and has handled dogs in Australia, Germany, Spain, France, Finland and Gibraltar. 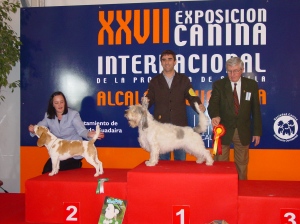 In 1998, Marina accepted her very first appointment to judge Beagles and junior handling at an open show. In 2014, she is due to give her first set of CCs in Beagles at the world famous Windsor Championship dog show. 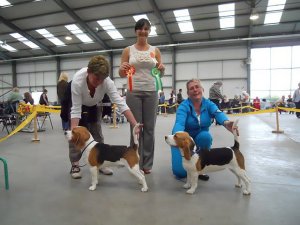 She has judged over 900 junior handlers, including the prestigious UK Junior Handler of the Year competition in 2010 and has judged around the world including Finland, Norway and Germany. 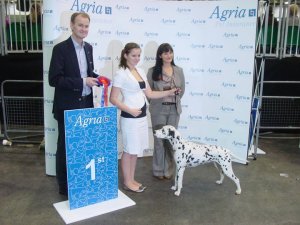 Marina judging the UK Junior Handler of the Year final in 2010, a competition which she won herself in 1998. Marina’s winner was Charlotte Page handling a Dalamatian.