At Crufts 2019, Marina was asked to help Chanel 4 TV presenter, Radzi Chinyanganya how to handle a dog. The two minute piece was featured on Channel 4’s Crufts coverage. 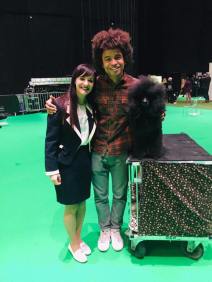 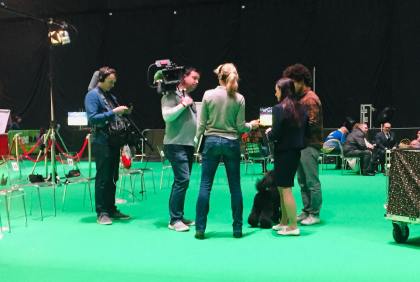 In 2014 and 2015, Marina was Master of Ceremonies at the Eukanuba World Challenge in Holland. She co-hosted the finals in a large arena at the RAI centre in Amsterdam. The event was filmed and ‘live-streamed’ to a worldwide audience. She was also part of the commentating team during the event. More videos of the event are available via the Eukanuba World Challenge challenge on You Tube.

In 2011, Marina joined DOG WORLD and the company was just making head way into the world of TV and producing their programming for Horse & Country TV on sky channel 280. Marina joined as presenter and also works on cameras.

Marina worked for the BBC for seven years as a Research Assistant when they filmed Crufts. Her role was to interview Best of Breed winners off camera and the information was passed onto presenters Peter Purves, Frank Kane, Dr Jessica Holm and Wayne Cavanagh to use in their commentary on BBC2.

From an early age, Marina has always had a keen interest in broadcasting, particularly in TV presenting. She took part in competitions and won prizes on the Children’s BBC Broom Cupboard and did a phone in with Donna Air on her MTV select show. While at school, she organised a short work experience stint with BBC Scotland where she was able to ‘have a go’ presenting the evening news off-air.

Therefore during her journalism degree at University, it was the natural choice to choose TV as her final year project and wrote, produced, directed and presented a 10 minute programme called “The Road to Crufts” of which she was awarded a first class mark.

Marina Scott interviews Andrew Brace at the emergency meeting the week after Crufts 2012, to discuss the BOB testing which happened for the first time at Crufts this year and where the Canine Alliance was founded. Andrew talks about his hopes for the meeting and the future, aiming to unite dogdom and get their message across to the Kennel Club.