Marina has been judging since she was 15 years old. In 2014 she awarded CCs for the first time in Beagles at Windsor Dog Show Society and in 2017 awarded CACs and CACIBs in Beagles at Dortmund’s International Bundessiger Show in Germany.

In 2016, she awarded CCs for the first time in Border Collies. Her main breeds are Beagles and Border Collies and Nova Scotia Duck Tollers (and judged Tollers at Richmond Championship show 2018) but is also a B list non specialist judge for Finnish Lapphunds, Bearded Collies, Siberian Huskies and Newfoundlands and judges many breeds (C list) across the Hound, Pastoral and Working groups and has judged best in show at general open shows three times.

She has also judged over 900 junior handlers in the UK and Europe. 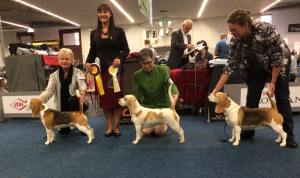